I strongly recommend to learn and use the Profiler and Frame Debugger tools to get an insight into how rendering is performed in your project. This is the only correct way to gauge where rendering optimization is needed.

The shader at its core is optimized through efficient use of resources and will typically outperform anything similar created using Shader Graph. Though, the performance impact largely depends on the amount of features enabled. Expecting desktop-level graphics on mobile devices is unfortunately not realistic.

Water is a complex phenomenon, and requires a lot of layered elements to achieve a believable effect. It is arguably one of the most complex shaders in a game. A notion worth keeping in mind.

A general rule of thumb is: The more features are enabled, the longer it takes to render the water in a single frame.

Modern devices can run the shader in a simple scene with all features enabled and not notice a difference. If you’re targeting older devices, be sure to disable any features that do not contribute to the art direction.

This involves re-rendering the scene geometry from a mirrored perspective, so can potentially double the rendering cost of a scene.

It’s important to make use of the Culling Mask field, and only reflect layers that are important for the visual result. This would require you to create new layers, and set specific objects/prefabs to these layers.

At the time the “Rendering Layer” dropdown on renderers cannot be used for culling. Once this functionality evolves, the Planar Reflections feature will be updated to make use of this.

A 2nd camera is used, that renders the scene from a mirrored perspective.

This camera (by default) also renders using the default “renderer asset”, which means any Render Features (eg. third-party post processing effects) will render for this camera as well. In most cases this is undesired for performance reasons.

Some third-party render feature aren’t made to work with oblique projections (used for reflections). This can also break the appearance of the reflections.

The solution is to create a separate “empty” renderer, specifically for planar reflections. To do so: 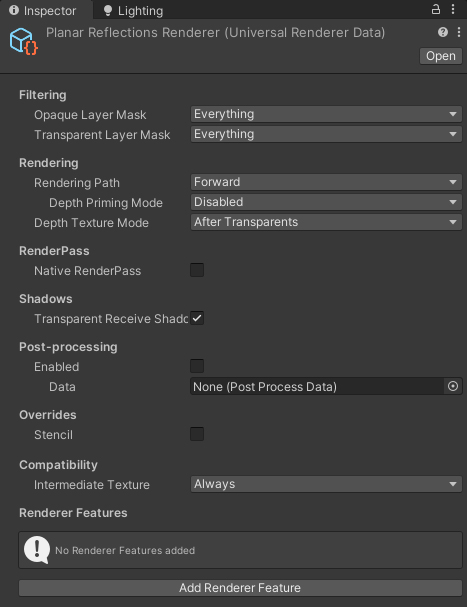 On the Planar Reflection Renderer component, configure it to use this renderer, instead of the default one.

With this set up, you can ensure no unnecessary or unwanted rendering is performed for the reflections.

Because it’s common for a project to have varying quality scales, there’s a static function in place which can toggle planar reflections globally. This could be tied into something like an option, in a settings menu.

As a performance safeguard; reflections will never be rendered for any hidden or overlay cameras. If you’re using a hidden/off-screen camera, ensure the camera object is using HideFlags.

Suggest edit
4 of 4 users found this section helpful
If you're familiar with this asset, please consider leaving a review!
Your support is instrumental to its future
« Troubleshooting/FAQRoadmap »