At this point you should already have the Stylized Water 2 asset installed. The Underwater extension will import directly into its folder. Without this installed first, you’ll be posed with at least one unsolvable console error.

Refunds can not be issued failing to acknowledge that this is an extension asset (mentioned on the store page 4 times). An alarming amount of users buy only the extension, without owning the water shader. This is not covered by the Asset Store refund policy (EULA).
The minimum version requirement of the Stylized Water 2 base asset is v1.1.5. You may get script/shader console errors when using an older version. Always try to update to the minimum required version

Notifications with quick-fix buttons will be displayed if any other set up is required. 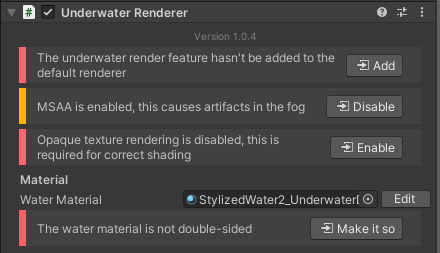 You’re now set! The waterline and underwater fog will automatically render once the bottom of the screen touches the water.

On the water material you’ll now find two paramaters, specific to the shading of the underwater surface

As of the v1.0.4 a large part of the graphics have been reworked, next to vastly improved performance, landing on a definitive version. Though there is still room for future enhancements.

Suggest edit
4 of 4 users found this section helpful
If you're familiar with this asset, please consider leaving a review!
Your support is instrumental to its future
« CompatibilityUsage instructions »