Objects intersecting with the water must use a shader that writes to the depth buffer, otherwise there is no way to tell where it is positioned in 3D space. For instance, Unlit shaders do not write to the depth buffer. You can download a modified Unlit shader here, which does: http://staggart.xyz/public/Unlit_ZWrite.shader

If using shaders other than Unlit shaders is not viable for your project, consider using vertex painting to paint the intersection effect instead.

These steps reduce the rendering range for the camera and therefore increase the accuracy of sorting. After which, the water will render correctly.

This is essentially correct, between the two camera modes depth is rendered very differently and affects how the water is rendered. The material parameters should be configured for the camera mode you are actually using. This does mean you most likely can’t use both a perspective- and orthographic camera at the same time.

In this case, your water mesh is probably be very big. If you need higher waves than the shader value allows for, increase the scale of your mesh on the Y-axis to the same effect

This is an indication that the vertex-density/polycount of your water mesh is too low. Add subdivisions to your mesh to increase the wave fidelity.

Much like a pin-art toy; the more pins it has, the more detailed the shape becomes.

Transparency is set to 0, but water still has a faint bright color

This only applies to the Desktop shader. The transparency parameter doesn’t actually control the shader’s opacity, but rather controls the amount of visibility of the objects rendered underneath the water. This is known as a GrabPass. The water shader is built on the PBR model, so it inherits some shading properties such as fresnel, which explains the faint brightness.

This behaviour is by design, so it’s still possible to have crystal clear water, while retaining the refraction capabilities. Otherwise the water would simply turn invisible. When the “Unlit” toggle is checked, this is not an issue, since all lighting is overridden.

This is actually correct behavior, and is a common limitation of using a GrabPass. Essentially opaque objects above the water are also refracted.

A way around this is to render the geometry underneath the water into a separate refraction camera. However, the performance trade-off for such a technique is generally not worth the small visual improvement, which is why it is not implemented. It’s also something that’s can’t be toggled, based on quality settings, so would affect all users.

If there is no Directional Light in your scene this may be the case. Most mobile setups do not use any lighting, for performance. In which case you should set the lighting method to “Unlit” in the Lighting tab.

This is usually caused if there is no light source in the scene, or your scene-view has lighting switched off.

This occurs when using Unity’s built-in MSAA and can be remedied by using an Anti-Aliasing image effect instead. This is because the depth texture Unity renders is created before MSAA is applied. 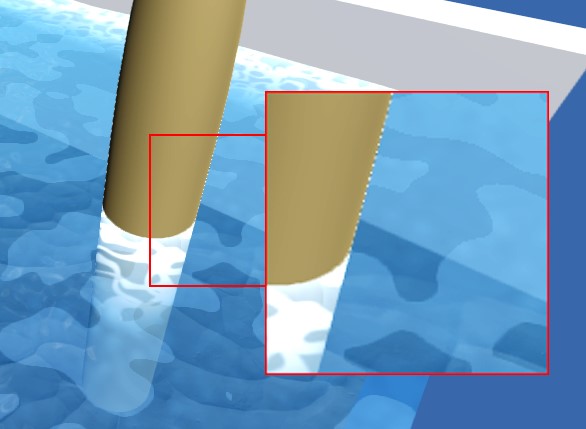 This is due to compression of the shader textures. You can override this compression in the inspector under the “Advanced” tab.

This will impair a slightly larger memory cost as the two textures will be larger in file size.

You can elevate this issue by doing taking the following steps:

The “WebPlayer” target platform does not support writing files to disk and is thus not supported. The WebPlayer functionality was officially deprecated since Unity 5.4.